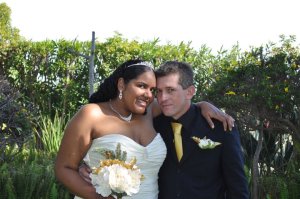 January 01, 2011 was the first day of the new year and the new lives of Mr. and Mrs. Wiliam and Renee Jones-Carvalho who were married in a noon ceremony at Shanghai Red’s Restaurant in Marina Del Rey, CA.

For the past nearly four years their story has unfolded like the making of a Hollywood movie. They met while they were both guest workers in Japan; she was an American born English teacher and he was a Brazilian born welder working in an auto manufacturing plant. Their mutual Japanese friends introduced them because they were both foreigners.

In April 2010, Renee’s contract was up and she decided to return to the U.S. along with Wiliam who was now her fiance.  However Homeland Security had other ideas and Wiliam was stopped at LAX and forced to leave the country and go back to Brazil.

For the next eight months they battled U.S. and Brazilian authorities in order to get Wiliam’s visa approved so that he could return to California and they could marry. After many setbacks, his visa was finally approved in December. He arrived in Los Angeles on Christmas Eve and they were married on New Year’s Day in a ceremony that included a Brazilian style ring exchange and a Bread and Salt Sharing ceremony that involved all of the guests.

They have decided to take advantage of the Name Change Act of 2007. Wiliam Pereira de Carvalho will join his name with that of Renee Jones and their family will carry the surname Jones-Carvalho. They are expecting their first child in April 2011.